The word for Today’s Five Minute Friday is Story.

Here are the rules:

1. Write for 5 minutes flat – no editing, no over thinking, no backtracking.
2. Link back here and invite others to join in.
3. And then absolutely, no ifs, ands or buts about it, you need to visit the person who linked up before you & encourage them in their comments. Seriously. That is, like, the rule. And the fun. And the heart of this community…

First thing I think of is the old spiritual, “I love to tell the story.  ’twill be my theme in glory to tell the old story of Jesus and his love.”

This is especially comforting this week as we found out a classmate of my sister’s died this week.  So young and he will be missed. 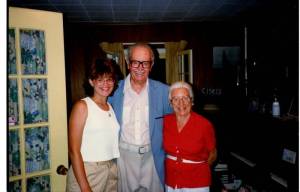 I also think of stories and the ones that I grew up listening to from my grandfather.  Here is an old picture of me with my favorite story-teller and his lovely bride, my grandma.

Currently, I am reading a book that a friend of mine wrote.  It is a great story and one that I am truly enjoying — and finding a hard time putting down!  She did a great job and I am so impressed that she published it.

I also like to tell my own stories and hope to work on a new one very soon.  This week I found out that I am a direct descendant of a passenger on the Mayflower.   I was beyond excited to find this out.  This person was a young woman and sounds absolutely fascinating.

Can you imagine how different her life must have been from a young woman today?  It boggles the mind to think of the changes since then.

In addition to this story, I have a children’s book in mind.  Hopefully I can work on both of these items very soon.  I do so love to write and like a variety of ways to do so.  One of my favorites is on this blog when I write about whatever is on my mind.

I can’t imagine my life without being able to tell stories.  And, my son already has a gift of telling stories.  He has drawn a few that I will have to share sometime.  He also has told me some great stories before bedtime.

I think both of us received this ability from my grandpa.  He told fantastic stories orally to us, and also did a great job writing a variety of items and slices of his life.  He is truly my inspiration.

I wonder what stories I will find to inspire me today.  I so look forward to the discovery and the process of writing them!

To read other postings on Story, please see http://lisajobaker.com/2013/08/five-minute-friday-story/

“It’s like everyone tells a story about themselves inside their own head. Always. All the time. That story makes you what you are. We build ourselves out of that story.” — Patrick Rothfuss

Did you know that this weekend just past was the National Storytelling Festival in Jonesborough, Tennessee?  I didn’t get to go but I bet it was a fun weekend.

They had a variety of storytellers and I am sure a lot of great stories!  Did you go or have you ever been to hear a storyteller?

I grew up with storytelling as you know.  My grandpa was great at it and created some fun characters — Willie, Mrs. Oheyu, and Professor Wufolskorsky, among a few others.  They were part of my family and fun to hear about.

I think that the gift to be able to orally create a character and tell a story is God-given.  Not all of us can weave such an amazing tapestry.  Maybe it can be learned as well and certainly developed over time and practice.  I was privileged to know someone who was a wonderful weaver!

Another storyteller that I heard who was fantastic was Bill Cosby.  About 6 years ago in Florida, he was in concert.  He told us about going to chop down his family’s Christmas tree in the snow with his kids, when a bear came up and scared them.  He said, “Bears don’t eat crazy,” so crazy he became.  The bear then went away and left them alone.

Dr. Cosby also told us about asking his butcher where on the turkey was the cut for bacon.  He explained that on a pig, it is clear, but wondered about the turkey as well.  The audience roared with laughter at the details and explanation and account of this conversation.

These stories were so funny and memorable that I can still recall them and how much I laughed while he told them.  And, I have always liked his books, stand-up material, and “The Cosby Show.”  He is a gem and a gifted funny man and educator.

My grandfather’s stories were truly memorable, funny, and touching as well.  I think that is the sign of a good storyteller.  You remember the sounds, the words and expressions used, and the material itself for many, many years after hearing them.

I consider myself a storyteller as well, but I prefer the written word to orally presenting my stories.  There are many ways to tell a story and I am happy to be in a family of people who enjoy telling them!  We all have a story to tell — we just have to find it and how to tell it.

Now we have another storyteller in my family.  My son Ian is starting to show the gift of this art.  This summer he told me a story.  I had recorded it in my journal.  It was dated July 19:

“Ian told me a wake-up story about a rainbow-making truck, a guy named Willie, and another truck.  He said that rainbows come from God.  He also mentioned Thin John Little (who was a character from my grandpa’s stories) and that Willie had gotten stuck up in a tree with a parachute.”

Beautiful!  I was so impressed and wanted to hear more!  He has told other stories since then and each one is memorable, and funny.  He has a real gift –even at just 5 years old.

Last night before going to bed Ian told me that he wanted us to work on a new story today.  I said, “okay Ian, we will do that.  Sounds like fun to me!”  I am thrilled and can’t wait to see what we come up with!  I will let you know what develops!

I hope that you can find the way to tell your story — whether it be through words presented orally or written, through acting, photography, your activities, or music!  There are so many ways to share!

“The purpose of a storyteller is not to tell you how to think, but to give you questions to think upon.” — Brandon Sanderson