(Note: Since my husband’s passing in late November, I haven’t been inclined to write. However, the current state of what is going on led me to write this blog. I am very troubled by the lack of willingness to work together by our elected officials. I know some may disagree with me, but I wanted to share some things to consider. Photos from Power Point clip art.)

I can think of several things that qualify for an emergency more than a wall. First, I do know that improved border security is needed and important. However, I am not sure if just a physical structure is the best way to go. Clearly some places need this structure. But, what about more officers, more immigration staff patrolling the border, more dogs, more technology, drones, and other things? And, what about working with these other governments and embassies to let them know we cannot receive them like this? Let’s work with them to ensure their safety in their own country so they won’t have to leave.

And, what about for example through the Rio Grande? Are property owners on that water to lose the view or should a wall be built in the middle of the water? Also, why is it only the southern border? Is that the only place that illegals are coming in? I think not. I know from personal experience that people come in via the ocean, land on the beach, and run. And, people and drugs come in via airplanes as well. Nothing from Canada?

The city of Flint, Michigan still isn’t with safe water and that to me is criminal. Families are sick and shouldn’t be. We still have children who are not with their parents who have tried to seek asylum in America. Why can’t the families be kept together? We still have school shootings where many kids are being killed and others are being scared of going. And churches sometimes no longer feel safe.

We have kids, men and women who are abused or are in sex trafficking and what are we doing? We also have a major opioid crisis and little is being done about it. We have violence, hate and discrimination that need to go away. And, we have children who are starving. We have teachers who have to use their own money to supplement what is used in their classrooms. We have police officers who are under appreciated and being killed for keeping us safe. We have people in disaster zones like Puerto Rico who still don’t have their lives back to normal.

On top of all of this is the government being shut down. Not only are people not getting paid, many are forced to work without pay while others have to stay home. They are supposed to be paid after this is settled, but who knows when that will be? I worked as a government contractor for years and am not yet sure how they will be affected with all of this. And, during this, the President and Members of Congress are getting paid. The very people causing the problem are still getting to continue with life as usual. That is so not right or fair.

And now we are seeing the impacts of things being shut down. We are seeing how gross some people are by not picking up after themselves at national parks or by destroying them. These are our national treasures that we should take care of. Let’s leave things better than we found them and help out by cleaning up and being careful. And people are having to wait in three-hour lines to board a flight for business or vacation. 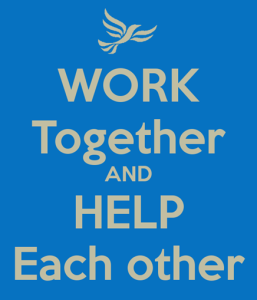 I long for the days when people such as Senator John McCain and Senator Ted Kennedy were alive since they argued strongly against one another, but found a way to compromise. And they were friends. You knew that despite the work involved, the hard hours, the disagreements, and the not quite getting what they wanted, they still worked together until it was done.

Now, all we hear is that the other side is the enemy and that they are useless, or stupid, or have no ideas. And the idea of compromise has become a bad one and only used by weak people – or at least that is what some people say. People, grow up, put on your big pants, and talk to each other. Our citizens are suffering. Our citizens need you to represent them and take care of them. Our citizens need to get their lives back to normal.

The irony is that the very thing being fought for is causing danger to our citizens. That to me makes no sense at all. The TSA and Pilots Union have already said there is danger in not having a full paid staff and yet no one blinks. The FDA cannot inspect food as they often do and no one blinks. The food stamps program and many other programs will run out of money in February and no one blinks. How bad does it have to get before our “leaders” care enough to make changes and all come to the table?

We need to pull together as the great country we have always been. Now, I am not so sure. I am so disappointed with all of our leaders in digging in their heals since they all think they are right. By being that stubborn, millions of Americans are suffering and will continue to do so.

I am sick of tired of each side complaining about the other. I am sick of my friends who keep posting crap about the other side as well. And, I have stopped reading a lot of that and/or responding. I just can’t do it anymore since even they don’t want to listen to another argument.

I think we all need to come together and learn to respect our differences again. We are not all the same and shouldn’t be. And we all have something to offer, if only the others would listen.