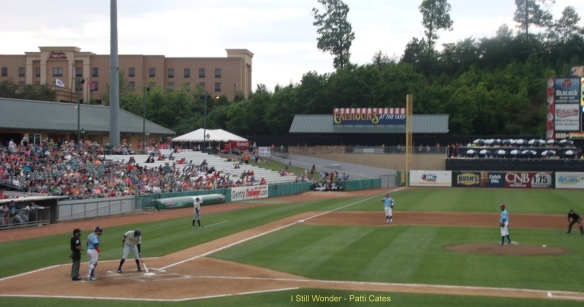 On Friday night, we went to a baseball game.  It was so much fun since I absolutely love baseball.  It is my favorite sport.  I enjoy others but this one is special to me.  My dad has always liked it and made a point to take us and watch it on television, so I grew up to love the game.

Kirk, Ian, and I went with Dad and his sister.  It was supposed to be a Cub Scout outing, but our family was the only one able to make it.  There are still so many end of the school year activities going on that kept people from coming. 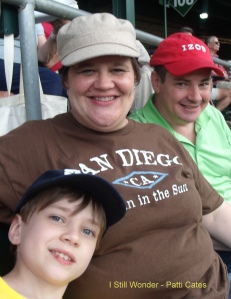 The five of us had a wonderful time, enjoyed cheering for the home team, and indulged in some yummy ball park treats — hot dogs, pizza, chicken tenders and fries, soft serve ice cream, an ice cream sandwich, and a funnel cake.  (We each had a few of these items, not all of them.)  The food was great, the weather was perfect, and the game was a good one.

The best part was that our team won — 9 to 4!  YEAH team!!  The game was followed by fireworks.  These were set to music and the perfect ending to a great night.  Ian, who also had fun, fell asleep on the way home.

There are several sounds and things that happen during baseball that I really like — the crack of the bat hitting the ball, watching your team hit a home run (which they did), seeing the other team strike out, yelling and cheering for the runner to make it around the bases before an out is thrown and watching the umpire declare that runner safe, a player in the outfield catching a ball, the 7th inning stretch, and seeing the home team win. 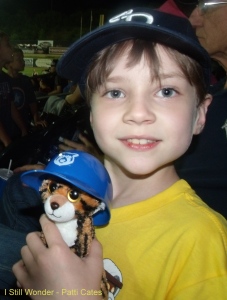 This was Ian’s second game that we have taken him too.  He seemed to really enjoy it and was curious about all of the rules.  He had his tiger stuffed animal with him. Here they are posing for a photo.

My favorite major league team is the San Diego Padres and I hope to go to one of their games soon!  That too would be a blast.  We do, however, like having the minor league club close enough to be able to go.

Baseball means summer to me and fun with family.  Here is the chorus of the song that has been part of the 7th inning stretch for years:

I cannot wait for the next game!  Just have to decide when and where!  Happy Monday.